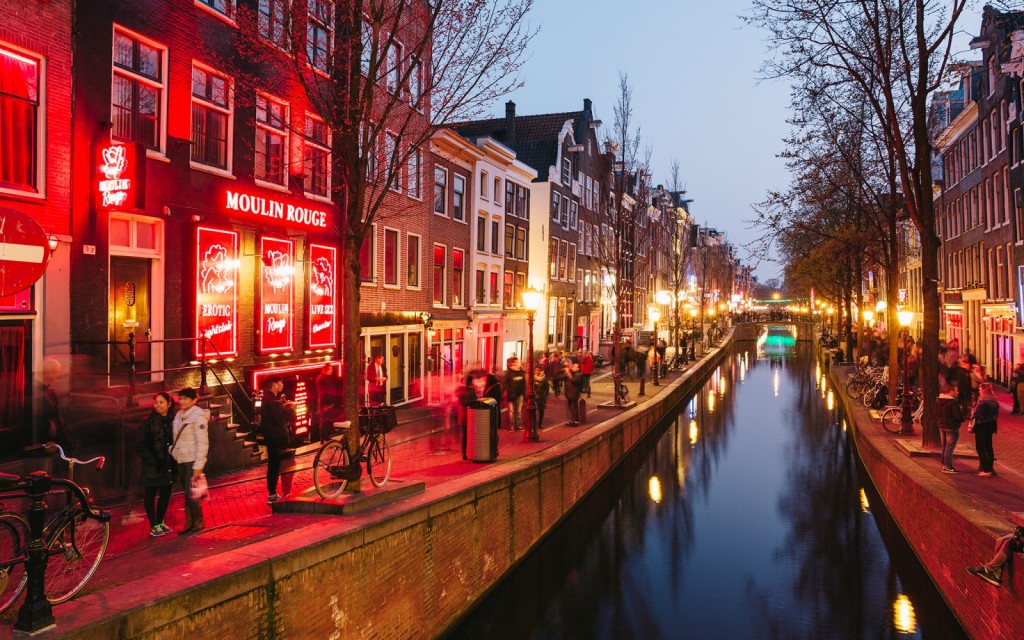 You haven’t truly experienced Amsterdam unless you have been to the Red Light district. This square mile called ‘De Wallen’, is the oldest part of the city. A great area with the most amazing atmosphere and wonderful buildings (cafe ‘in t Aepjen’, VOC, the Waag and the Oude Kerk) along the canals. You can stroll through the district and on your way have ‘a bakkie leut’ (a cup of coffee) or something stronger to keep you going. The exciting red light district neighbourhood of Amsterdam is alive 24 hours a day.

From brothels to sex shops to museums, the Amsterdam Red Light District leaves nothing to the imagination. You will have heard about this neighbourhood and to be frank, everything you will have heard is probably true! The locals call it the Rossebuurt, and is unlike anywhere else you have ever been. Guaranteed.

Certainly the Red Light District’s reputation is all about a place where Women of all nationalities parade their wares in red-fringed window parlours, many willing to offer more than a school boy peep-show in a private cabin. The Amsterdam Red Light District is crowded with packs of men, young and old, couples holding hands and pointing in shock of it all, giggling groups of women celebrating a hen night, and busloads of Japanese tourists carrying cameras.
But it is not just the parlours and bars that make this neighbourhood irresistible – it’s the fascinating people.To really put rumours to rest, go and check it out for yourself. Here some tips not to miss:

To get stoked up, go to the Green House Centrum; a garter’s toss from the red light district where serious smokers make a beeline for this canal-side coffee shop, which serves up an award-winning selection of skunk. The coffee shop is very popular so getting a chair can be a bit tricky. But not to worry as we have an insider’s tip; we booked the Smoke boat, and never had such a relaxing sightseeing tour, looking out onto the busy street. Great for people watching and to let your mind wonder……
The Smoke boat was exactly what it promised – a canal cruise whilst smoking a joint. Fun, positive, Zen, happy, relaxed….that’s how we felt cruising the canals of Amsterdam with a joint in our hand and some reggae music in the background. The tour had a very laid back vibe that we absolutely loved. We had a blast ,and a lot of fun seeing Amsterdam from a very different point of view. The boat is 70% covered and 30% open, so you can enjoy the agreeable effects of your spliff, without being knocked out by your neighbour’s reefer. The tour ends in the Red Light District so we decided to get some historical facts before hitting the district….. 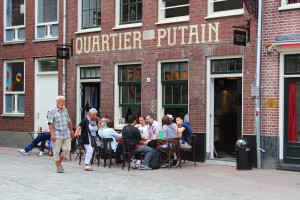 A café called Whore Quarter?? Oui oui oui!! This café offers amazing coffee and a top notch atmosphere. True to the name, this cafe in the De Wallen area is literally wedged between some red light erotic professionals, and the back wall of the Old Church. If you go early in the morning or later in the afternoon, you can view these fine sexual entrepreneurs as you sip some coffee at Quartier Putain. They have very fast Wi-Fi which is hard to come by in this city, and not to mention the people-watching in the red light district.
It is fun, hip, and happening, and when I went there the Jukebox was playing, drawing me in with the Hip Hopperige sounds. They also have delicious bakery items that are fresh and the Apple Pie is divine! There is seating right on the cobblestone street, and it was wonderful to sit there between all the windows, enjoying my coffee and pie, watching the extraordinary world in the Wallen go by! So drink your coffee in the most sinful street!

No time to do a red light tour, but you do you have half an hour to spare? Then go and visit the world’s only Museum of Prostitution. A small secret gem which gives you a look at the history of prostitution in Amsterdam. An interactive quiz teaches some of the economics of prostitution (average paid sex encounter lasts between 5 and 10 minutes, with an average starting rate of 50 euros), see a prostitute’s room, and the best part: you, too, can sit in an Amsterdam window and try to drum up business. Experience how it feels to ‘sit behind a window’, and photos are allowed! Every room you go into has been created to show you exactly how the workers live. An eye opening glance into the secrets of the famous Red Light District. I really had fun and found out a lot about the red light district. The wall of confessions was interesting to read, and for me it was well worth a visit! Step into a world that remains hidden. For curious adults only.

Take one of the behind the scenes tours for a fascinating insight into this unique quarter in Amsterdam. You will have super fun tour with our guide. A really nice way to get your foreign friends to see this side of the city! I enjoyed it, and even learned new things about my home town. Of course you get to see the prostitutes, and you will go to a peepshow! But the guide also takes you around small alleys and shows you unique sights, such as a secret church, and revealing stories about the real Red Light district. You can book the tour on the website and I can recommend it to everyone, as you get so much background information that we would never have gotten without a tour. We even had a few drinks afterwards at a local pub which was great. You will have a great evening with an original and funny atmosphere. Highly recommended! 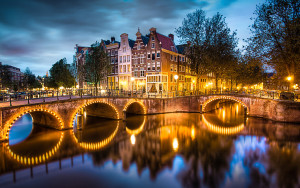 Explore the lovely canals of Amsterdam. You don’t want to miss this.

If you still don’t have enough and want a to meet and greet the most famous twin prostitutes, known as “The Old Hookers” , you have to meet the Fokkens, their real names are Martine & Louise Fokkens. These Dutch twin prostitutes are now 73 years old and have worked in Red Light District for 50 years! Take a picture with them and ask them anything you like.

A perfect surprise for a night out on her hen night is a visit to a true Red Light Studio and have a funny photoshoot for lasting memories. Furnished as a brothel styled room, complete with bed, lights and clothing, the bachelorette can be transformed into a woman of ill repute! In the locker room of the studio you will find a selection of kinky outfits, sexy wigs and fun accessories. So, what are you waiting for? Find the bachelorette a nice outfit and let her pose behind the red window for an exciting photo shoot that is the closest thing you can get to a real brothel! During this Red Light photo shoot all the girls can pose as woman of ill repute! Girl’s secret photo fun with a great laugh!

The first peepshow in Amsterdam was opened in the late 1960’s and proved a great success.
For people who are very interested in the subject the basic peepshow is a large, slowly-revolving platform on which a scantily-dressed, or naked woman, displays herself. The turntable is surrounded by cubicles with shuttered peepholes. When you insert a two euro coin into the slot machine, the shutter will open, allowing the visitor to gaze at the undressed woman for a few minutes. Go on, you’re in Amsterdam, where else are you going to get the chance to do this?

For just €2, you get a short, up-close taste of the action. Amsterdam’s last peepshow, is on the Oudezijds Achterburgwal, at the epicentre of the district.
And until then, the (peep) show WILL go on!

Peepshow Oudezijds Achterburgwal 84-90 (every hour after 4pm, a couple show)If you want to try this at home watch this video: a Dutch tv host who tries to do a peepshow.

Hi there! I'm Stephan, co-founder of Red Light District tours and Amsterdam Enthousiast. I organise boat trips, walking tours and personal tours. As a true Dutch I'm proud of our capital and I feel like its my duty to help others explore this beautiful place on earth.

We score out of stars, reviews from our customers.

What about these tours? 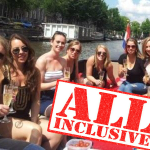 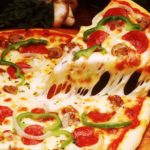 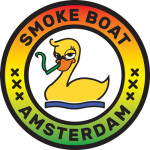 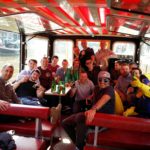 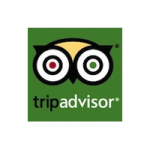